It was great! Absolutely fantastic actually. As I mentioned in my last post, I took the rest of the day off from work on Book Three, and went to see Sir Elton John perform on his epic farewell tour–over 300 concerts around the world between 2018 and 2021. I can’t imagine how he does this, city after city, night after night, but he’s been in training for this all his life. This IS his life. 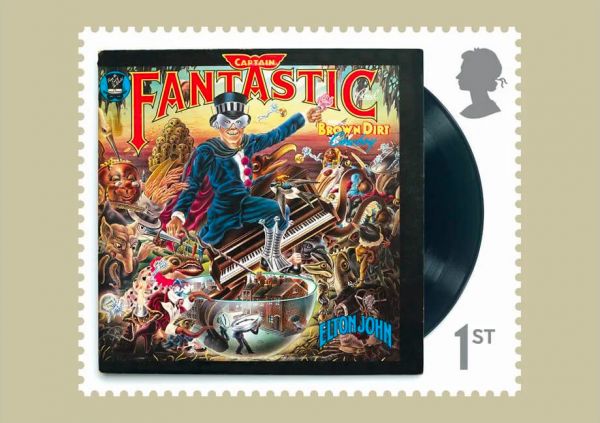 Is this cool or what? The Royal Mail has issued Elton John stamps!

It’s about a 2 1/2 hour journey to get to the venue in Tacoma, and by the time we arrived, the rain was coming down in buckets. We, by the way, is my son, his girlfriend, and me. I bought tickets for us as a very special treat when they first went on sale in February. My dog had an overnight with her best friend, Viola, a joyous 4-year old golden retriever, and Mr Fez stayed home to guard the house. (I do really say that to him when I leave and he’s does a very good job.) We found parking near the The Tacoma Dome, put on our rain gear…oh dear, I forgot to bring mine!…and walked a few blocks to get a quick bite to eat. Everyone around us was there for one thing…to see Captain Fantastic.

Elton John has been recording hits and touring for fifty years! I first heard him when I was 16 years old and still have the LP’s I bought back then…and a turntable on which to play them. I still feel like the young girl I was back then when listening to “Your Song.” You too?

So there we stood, in the dumping rain, waiting along with everyone else for the doors to open. We found our seats. It didn’t matter that they were half way up in the bleachers. We were there with a group of fans who came together to experience a piece of our shared culture and history. How many of us have sung along to Bennie and Jets, Tiny Dancer, and Rocket Man in the car, the kitchen, the shower? The full set list is here.

An Explosion of Light

As the dome filled, the excitement was palpable. The lights dimmed, the crowed started to cheer, and there he was in an explosion of light. I posted photos AND video of the concert, including that first moment, over on my Instagram feed, and please do click on it so you can get a feel of the energy of this amazing evening. He played and sang, but also spoke about getting sober and how much that has changed his life, the importance of his family, the amazing work the Elton John Aids Foundation does, and how much we, his fans, mean to him.

Today, two days later, I am basking in the glow of this incredible feel good event. When I walked with Gretapie yesterday, I was listening to his music with my ear phones, and late last night I looked to see where he was playing on the rest of the tour, and would it be possible to go and see him again. But this one amazing lifetime experience, that I am so glad to have and shared with my family, will do.

A Soundtrack for Life

Near the end of the show he sang “Your Song”, and dedicated it to all of us fans. He finished with”Good Bye Yellow Brick Road.”  Thank you Sir Elton John for providing the soundtrack for so much of my life.

12 Thoughts on It Was Great!

I saw him in Anaheim in 1971-small venue, basic 3-man band, and it was wonderful! Years later I saw him at Universal, huge band, lots of flash, and still wonderful!

Exactly! You are so lucky to have seen him, Susan. The drummer with him on this final tour, was with him when he started. He spoke about how fitting it seems to have him there with him.

I remember first time hearing “Your Song” on the radio at age 12, and falling in love . From then on his albums stacked up by my record player, including “Empty Sky”, that had to be special ordered, because it hadn’t been released in the US -I was reminded of that album last year when the song “Skyline Pigeon” played during credits of movie The Favourite
I got saw him with Kiki Dee at the Seattle Coliseum in 1974 at age 16 – unforgettable
Sorry to have missed this final tour-thank you for sharing the pics and videos –

I bet that was an amazing night, Terri! What gifts he has given us.

A few of us who were in the high school band, painted our school lockers with his song titles (mine was Rocket Man). The administration initially let it slide as our lockers were tucked away in the band area, but when other students tried to do the same, all the lockers were repainted grey/brown.

It would have been something to have seen all of them, Thomas! Thanks for sharing this memory with us.

Saw the Rolling Stones in Seattle/Tacoma area over 20 years ago!!! AMAZING!

Wow! I thought about going to see The Stones when they were in Seattle recently, but only one big concert was in my budget for the year, Gretchen. Thanks for checking in!

Celebrated my cousin’s 50th birthday 10+ years ago by attending Elton John’s concert at the Key Arena in Seattle. I remember a piano riff that went on forever. Pure genius. I still have my hoodie 🙂

I saw him in San Jose back in January and just loved the show. Only one (tiny) thing I wished they’d done differently. At the very end of the show he’s in his sweat suit (harkening back to fashion from a previous era of his concerts) and they have him climb onto this small platform w/ a rail around it and it rises up along this track to the top of the screen and through a door as he waives goodbye. I just thought he looked like he was standing w/ a walker and wished they’d sent him out in a way that made him look a bit more vibrant. he deserves that, even though he (like the rest of us) is getting older. Did you notice that at all? Like I said, small thing – loved LOVED the concert. He’s a gift.

I did see that, Teresa, but then the video kicked in of him walking away on the yellow brick road. I thought maybe they would have him turn and wave one more time in it, but it’s such a statement he is making to move on and embrace a new and very wonderful life.